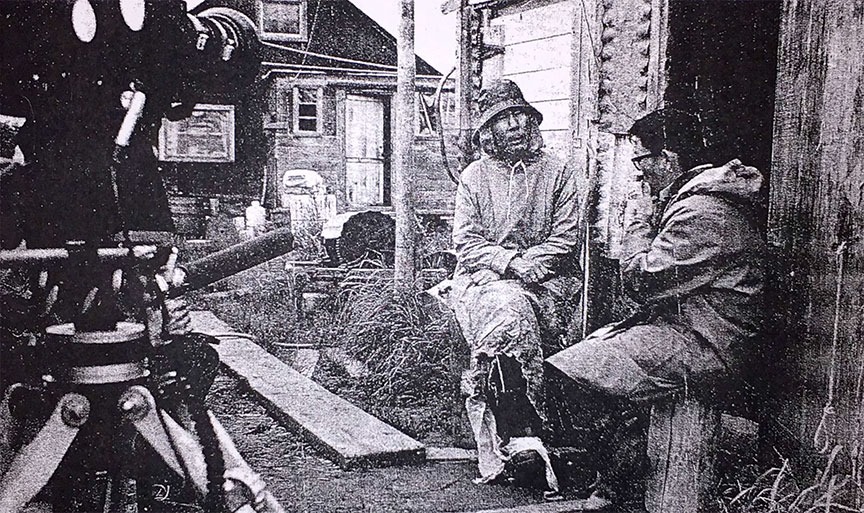 Emmonak elder Francis Lee (L) and Denis Shelden (R). Shelden was a young Yupik leader, whose conversation with Lee on a range of topics was used to create three of the SKYRIVER Lower Yukon Project films. The image is adapted from a September 1971 article about the SKYRIVER Lower Yukon Project, in a newsletter published by the CEDC: SKYRIVER: An experiment in change. (1971, September). The Village Voice, Vol. I, No. 4.

These films are all from the SKYRIVER Lower Yukon Project series of the collection, and are not documentaries—SKYRIVER, rather, was an early experiment in using media production as a vehicle for community development. The community, in this case, was the Yup’ik village of Emmonak, on the delta of the Yukon River, in western Alaska.

Due to the nature of the project, very few copies were made of the approximately 30 films produced by SKYRIVER—so the surviving prints are generally rather worn, due to the heavy use they received. Therefore, this project will make use of the Lower Yukon Project’s original, unique production elements (B&W negative, etc.), which were gifted to AMIPA in 1998 by Alaska Village Initiatives, the administrative successor to CEDC.

Francis Lee: Eskimo Life on the Yukon Delta is one of three films that were made featuring Francis Lee, a respected elder in Emmonak, and (speaking mostly in Yup’ik) expresses the community’s concern for the loss of traditional knowledge following 50 years of rapid cultural change.

Electricity Comes to the Village features Jasper Joseph and Jacob Johnson, who were chosen to communicate the village’s concerns, a few months after Emmonak had received electricity through the newly-formed Alaska Village Electrification Cooperative (AVEC).

William Trader: Children Leave for School is probably the most significant document produced by SKYRIVER. Through the voice of Trader, the film describes the trauma experienced by Alaska Native families in rural Alaska, if they wished their children to receive a high school education—which at the time meant attending a boarding school, far from their homes and families, often outside of the state.

Alaska Village Initiatives just celebrated their 50th anniversary, and next year will mark 50 years since the beginning of the Lower Yukon Project, so this seems a timely moment to re-visit these important documents, and make them more generally available. It is AMIPA’s intention to distribute DVD copies of the restored films to civic and cultural institutions in Emmonak and the Yukon-Kuskokwim region, following the completion of the preservation work.

It is hoped that increased accessibility to these three films might generate interest in the collection, and open funding opportunities to restore additional films from the SKYRIVER series.