A Calista Shareholder from Bethel has joined the multi-talented team of surveyors, drone pilots and digital map specialists supporting Brice subsidiary projects in Alaska and the Lower 48. 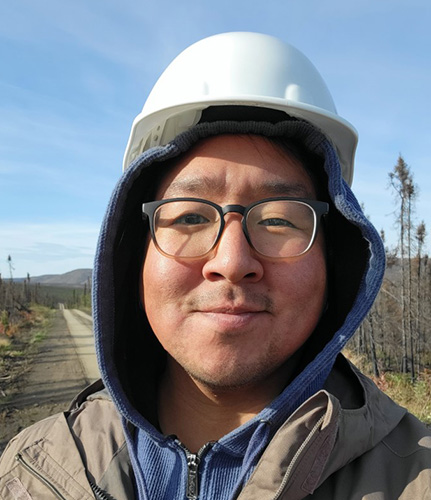 Hired last June, Tracy Asicksik is part of the expansion of the GIS/Survey team embedded in the day-to-day work of Brice Environmental Services, Brice Engineering and Brice Solutions.

“I thought it would be really cool to go back and work for my corporation.”

“It’s been pretty fun,” says Asicksik, who is Yup’ik and Iñupiaq, and has maternal ties to Kipnuk, where he spent childhood summers helping with subsistence. He graduated from Bethel Regional High School in 2010.

When Asicksik left Bethel to attend the University of Alaska Fairbanks, he planned to study computer science but switched his major to geography with a concentration in geospatial sciences. While in college, he interned with both Calista and the National Park Service.

After receiving his bachelor’s degree in geography with a minor in Geospatial Information System (GIS), Asicksik worked for a couple other Alaska Native-owned companies before spotting the opening for a GIS Specialist position at Brice.

“Professionally, this is the happiest I’ve been,” says Asicksik, who gives credit to a supportive team and interesting assignments, including the Donlin Gold Project, where his team generates survey data and GIS imagery for monitoring wells and soil borings.

Asicksik’s story shows how the growth of a Calista-owned business can expand or create new career paths for Calista Shareholders.

“All our projects have these three components. This team supports every project we do,” says Corey Schwabenlander, Brice Engineering Program Manager,who supervises the team.

Projects can include everything from providing survey locations for lead contamination at firing ranges to helping a 2017 Bethel Search and Rescue missing person search with a drone-mounted thermal-infrared camera.

Dylan Hickey, the team’s Lead Geospatial Analyst, was able to foresee how Unmanned Aerial Vehicles (UAVs) would transform work in the Brice company specialties: rural construction and environmental services. When the Federal Aviation Administration authorized commercial UAV operation in 2016, Brice was ready to deploy drones on its projects.

“It’s helped us differentiate from our industry competitors,” Hickey says, adding that UAVs also have the potential to help reduce costs for rural Alaskans. For example, UAVs could help reduce the cost of cargo delivery to villages, which are challenged by high shipping fees and weather cancellations.

GIS/Survey jobs require an educational and industry background in earth and geospatial sciences. In addition to the program offerings at UAF, the University of Alaska Anchorage offers a bachelor’s degree in geomatics, with an emphasis in surveying or GIS.

Asicksik suggests that any young Shareholder interested in the sciences should take an Intro to GIS class. While the class may seem intimidating, proficiency in GIS is now integral to many different careers—from wildlife biology to environmental remediation.

When Asicksik began his college studies, he switched from computer science to earth science due to unpleasant coursework. But in order to complete his geography degree, he still had to take that original computer science class that prompted him to change his major.

“I actually ended up doing pretty good in the class and learned a few things that helped with my GIS work.”