Emmonak is the transportation hub for 13 communities. Most major freight arrives by barge or air in Emmonak and is then delivered to the other villages.

In addition, the regional commercial fishing industry, which supports hundreds of workers in the villages, uses the port to launch and windup their vessels.

For nearly a decade, Calista Corporation advocated alongside local leaders and other regional partners to secure new port infrastructure in Emmonak.

Their efforts bore fruit in 2018 when Alaska’s Congressional delegation announced a $23.1 million federal transportation grant to pay for a permanent dock, barge/landing craft ramp, and repairs and dust control on nearby service roads in Emmonak. The Yukon Delta Fisheries Development Association committed $1 million as a cash match to the project.

The port project will improve worker safety by allowing barge side tie-up and crane offloading of smaller cargo, and safer offloading of heavy equipment and large-volume shipments. The project will also reduce exposure of the existing riverbank to further erosion. Community leaders are optimistic that improved barge landing facilities will attract marine shipping companies and continued economic growth in the Region.

Project equipment and materials began arriving by sea this summer. Road repairs are underway this fall, and dock construction is scheduled to begin in early spring. 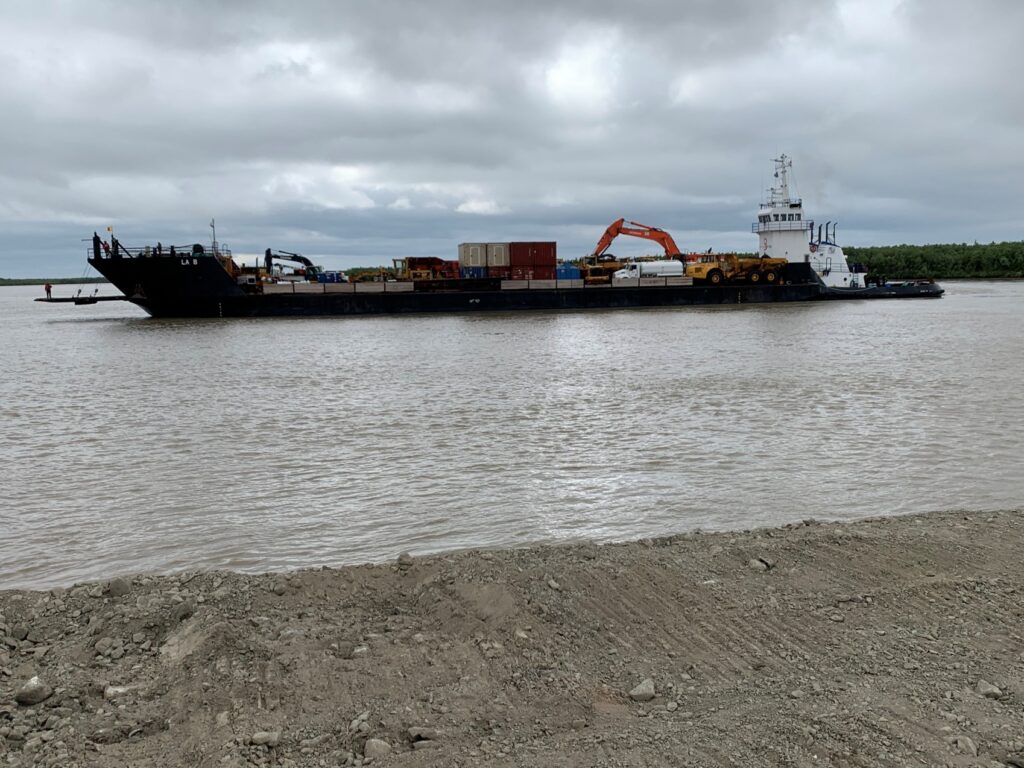 The barge arrived in Emmonak with heavy equipment, mobile office, and trucks needed for the project (July 2020).

Joan Herrmann, who has provided grant administration for the project, shared the following advice for other small YK communities that would like to pursue regional infrastructure projects.

“Projects work best as part of a long-term strategic plan with a regional outlook. There are many needs in our communities, so including all stakeholders and agreeing on priorities is important,” says Joan. “Make the most of your relationships with other communities, government agencies, local business, and non-government organizations to form a plan that benefits everyone. It is worth taking the time to ensure everyone is on board. Be patient and keep moving forward.”