Quyana cakneq to Governor Mike Dunleavy, the Alaska National Guard and our Congressional Delegation for immediately responding to the plight of our communities harmed by the 2022 West Coast Storm. 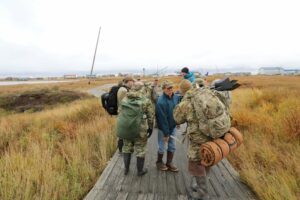 The storm seriously damaged or destroyed more than 100 homes in the Calista Region. Governor Dunleavy’s disaster declaration during the storm activated the State Emergency Operations Center, which quickly coordinated disaster relief for our villages.

Over 160 service members from the Alaska National Guard, Alaska Naval Militia and Alaska State Defense Force deployed to Western Alaska villages with supplies and equipment for storm recovery. They removed tens of thousands of pounds of debris and helped repair damaged homes. State agency personnel also arrived quickly to repair community infrastructure including roadways and seawalls, and to survey flood levels, wave surge, and erosion in the most impacted areas.

Thank you to our Congressional Delegation and Governor Dunleavy for quickly securing a federal disaster declaration from President Joe Biden so individuals could obtain financial assistance for repairs before the winter season.

By October 21, FEMA had awarded over $3 million to storm survivors for housing assistance and repair or replace damaged personal property, which includes subsistence equipment and tools.

We appreciate Governor Dunleavy’s early recognition of the cultural significance of the loss of subsistence foods. The Alaska Department of Fish and Game’s approval of a Unit 18 emergency hunt was one opportunity to for communities to replace spoiled food before winter.

Amid the massive storm response, the National Guard also provided air support to Bethel area search and rescue volunteers during their efforts to find missing hunters. On behalf of our grieving Shareholders, a heartfelt quyana.

These are just a few ways the state and federal governments demonstrated they can be a good partner to our Tribes, and also to the donor organizations who gathered a massive amount of money, food, materials and equipment.

We appreciate the meaningful results of these partnerships tested and proven to work in a difficult time.