Get Ready for Ranked Choice Voting

Q&A with Michelle Sparck of Get out the Native Vote

In the August 16 special general election to fill the late Congressman Don Young’s term, Alaskans will have their first opportunity to vote using the state’s new ranked-choice voting system. 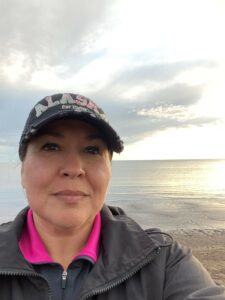 One of the people preparing Alaskans for this new way of voting is Calista Corporation Shareholder Michelle Macuar Sparck, who has a key role with Get Out the Native Vote (GOTNV), a non-partisan voter education effort under the Cook Inlet Tribal Council, where she serves as Director of Strategic Initiatives.

We recently interviewed Sparck, who is originally from Bethel, about ranked choice voting and the importance of voting to our Region.

What is ranked choice voting?

It is the law right now for how we conduct elections in Alaska. Alaskans will pick their top choice, and then have the opportunity to rank their second, third and fourth choice.

For any candidate to win, they need to get 50 percent plus 1 vote. Maybe your first choice gets knocked out if they rank too low, but in an instant run-off, your second choice may move forward, and so on. We only have three candidates to choose from to serve out Congressman Young’s term (and one of them happens to be from the Bethel region) so we will only be ranking three people, unless you’d like to write someone’s name in. 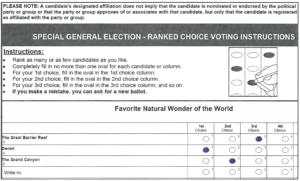 Filled-in sample ballot for Aug. 16 special general election. Note that it includes 3 candidates plus a space for a write-in candidate. Only 3 candidates are named because one of the top 4 vote-getters in the June 11 special primary election dropped out of the race.

What is your role with Get Out the Native Vote?

Our organization is educational and non-partisan, and hopefully a trusted resource for our community. We won’t tell you who or what to vote for, but how to vote so that it counts. If you are going to make the time to vote, we want it to count.

In August, we’ll be hosting a polling station at CITC in Anchorage. Early and absentee voters from any district can come here and we’ll walk them through the process.

Why do Calista Shareholders need to vote?

The YK is a special place. It’s like an incubator where communities grow bigger and mature in the services they need to provide. Our elected officials are the ones involved in funding for Tribal programs every year, they can affect everything we do. We’re their boss, and if they don’t hear from us, we may not get what we need.

With our population, we have the potential to have a huge pull, and that means coming out in force to vote.