Thomas Maloy: A Calista Shareholder Drawn to Serve His Country

Our Shareholders—especially Elders who served in wartime—deeply appreciate our Alaska Native veterans.

We see this in many ways, including the advocacy of Calista Elder Nelson Angapak of Tuntutuliak, a military veteran who recently helped achieve a new process for Vietnam War-era veterans to apply for Alaska Native allotments. 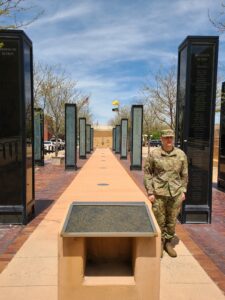 As a company, Calista invested in building the National Native American Veterans Memorial in Washington, D.C., which will be formally dedicated this Friday.

Another way we collectively support all military veterans is by hiring them and supporting employees who want to serve our country.

This is especially apparent at Calista’s Yulista Holding Line, where 30 percent of all employees are veterans.

ENCOURAGING ME TO GROW

Thomas Maloy is a Calista Shareholder with ties to Bethel who became a National Guardsman after joining our Yulista Holding Line.

Maloy’s path to active duty began when he was hiring by Yulista subsidiary Chiulista Services to work at Kirtland Airforce Base in Albuquerque, and later, with its sister company, Tunista Services.

Maloy flourished in his positions with Chiulista and Tunista Services. To this day, Yulista colleagues describe him as a fantastic employee. Meanwhile, Maloy also signed up to serve in the National Guard on a part-time basis.

“Yulista is a very veteran-friendly company. If anyone wants to put on the uniform to serve their country, they are very supportive of it,” Maloy says.

The New Mexico National Guard activated during the COVID-19 pandemic and Maloy took leave from Tunista Services. He spent the next year-and-a-half supporting the Navajo Nation with the distribution of food, water and medical supplies.

After that assignment, fellow Guardsmen encouraged Maloy to pursue a full-time military career. He resigned from Tunista and is now a first lieutenant in the National Guard, based in Farmington, New Mexico, in charge of human resources and logistics.

“I ended up letting Tunista know how much they’ve really supported me. Whereas a lot of companies just want to keep you where you are at, they were encouraging me to grow.”

“So many doors were opened for me. I would not have had this opportunity if not for working at Chiulista and Tunista,” Maloy says.

WORKING FROM THE HEART

Andy Gignilliat is a Yulista subsidiary group president who retired as an Army colonel with prior service as a test pilot and in special operations. 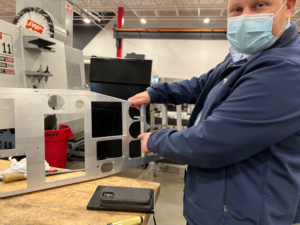 Yulista Subsidiary Group President Andy Gignilliat sees a connection between supporting veterans and the role of an Alaska Native corporation.

After 25 years of service in the U.S. Army, he is grateful for the opportunity to support the defense of our country by working for Yulista.

“I get to do something that I can put my heart into, that I can believe in. That’s a great transition for a service member,” says Gignilliat.

Gignilliat sees a connection between supporting military veterans and the role of an Alaska Native corporation providing benefits to its Shareholders.

“So often when a soldier or a veteran serves their nation, they develop a perspective of service. Being an Alaska Native corporation ties into that well, because our Shareholders are the Alaska Native people. It isn’t the typical Shareholder relationship with a company,” he says.

“At some point during their service, they came into contact with a piece of equipment, or a service provided by Yulista or another government contractor. They understand the impact these products and services have on our country’s defense,” Hambrick says.

Today, out of 1,955 Yulista employees, 30 percent are veterans. This year, 35 percent of Yulista’s new hires were veterans.