A few years ago, Calista Shareholder Taylor Malone was a high school student in Palmer, contemplating a future that didn’t involve college. 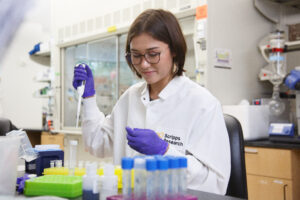 Taylor Malone grew up in Palmer and has family ties to Toksook Bay and Bethel. Photo: Scripps Research Institute.

This fall, she has co-authored a scientific journal article and is pursuing a degree in biochemistry and biophysics at an elite East Coast liberal arts school.

You might think a college student with a scientific paper under her belt forged a straight line on her educational journey.

“It made me realize college is nothing like high school. I felt like I had a reason to go to class and I felt respected intellectually,” she says.

However, as a first-generation college student, Taylor had done very little research and had no cohesive plan for applying to schools. “At that point, I planned on being an engineer of some sort. I knew I wanted to do science,” she says.

Taylor applied to colleges specializing in STEM and accepted the strongest aid offer she received, from Clarkson University in upstate New York.

On arriving at Clarkson, Taylor declared chemical engineering as her major. But it didn’t take long to realize that she would prefer a liberal arts education. “I was taking all STEM courses [at Clarkson],” she says.

The pandemic gave Taylor an opportunity to take a gap year at home in Alaska and apply to liberal art schools as a transfer student.

“I’m so grateful I took that year off,” she says. While Taylor was in Alaska for her gap year, she spent a lot of time beading, often with her mom and sometimes with her sisters.

While Taylor was in Alaska for her gap year, she spent a lot of time beading.

“My mom originally taught me beading and once COVID happened, I had much more time. It was soothing and really wonderful. All of us were very stressed and anxious about the uncertainty and deaths around us,” Taylor says.

Taylor’s beaded jewelry got some high-profile attention, and she was enlisted to teach a couple of beading classes via Zoom for the Bethel Council on the Arts. “I loved doing that. It feels so good to see people create something from the knowledge you shared with them.”

While Taylor grew up in Palmer, her roots are in Toksook Bay and Bethel. “I would say my big cultural connection is beading, because of how grounding it is.”

In her gap year, Taylor applied to liberal arts colleges, and she also applied for a 10-week summer internship as a research undergraduate at the Scripps Research Institute.

“This is another thing I didn’t know as a first-generation college student. Most people apply to many of these research undergraduate programs, not just one,” she says.

Taylor was offered and accepted an internship at a Scripps Research laboratory in Florida. She says the first day was terrifying, because she had never even been inside a professional lab. “I felt really underqualified, but the principal investigator and my graduate student mentor were so accommodating. If I ever needed help, someone was there to answer questions.”

Taylor was assigned to work on research involving a protein named “tau” that is being investigated to find a cure for Alzheimer’s and Parkinson’s diseases. Lab work can be long and tedious, and during lulls in this project, Taylor was able to assist with experiments and contribute images to the broader project, the findings of which the lab was preparing to submit to an academic journal.

Because of her contributions to the second project, Taylor received co-authorship on a research paper published in the Journal of the American Chemical Society on September 30. The title of the paper is “Targeted Protein Acetylation in Cells Using Heterobifunctional Molecules.”

Also this summer, Taylor was accepted to Amherst College in Massachusetts, and she returned to the East Coast this fall as a sophomore. Her experience at Scripps has influenced her aspirations after graduating. “I can see myself pursuing a dual MD/PhD,” she says.

While she enjoyed her gap year back in Alaska, Taylor has no regrets about returning to school.

“I bring my Yup’ik identity wherever I go. I never set it aside for anything. It affects the way I make decisions, the company I keep, and the work that I do, whether I’m here at school or back home,” — Taylor Malone, Calista Corp. Shareholder

Taylor also says she’d like to offer her support to other youth with questions about potentially going to college and pursuing education, especially in STEM.

“I’d like to help. I didn’t get here on my own. I got here with the supports of dozens of people.”

Interested in a Calista Corp. internship in STEM or other fields? Learn more and apply here!